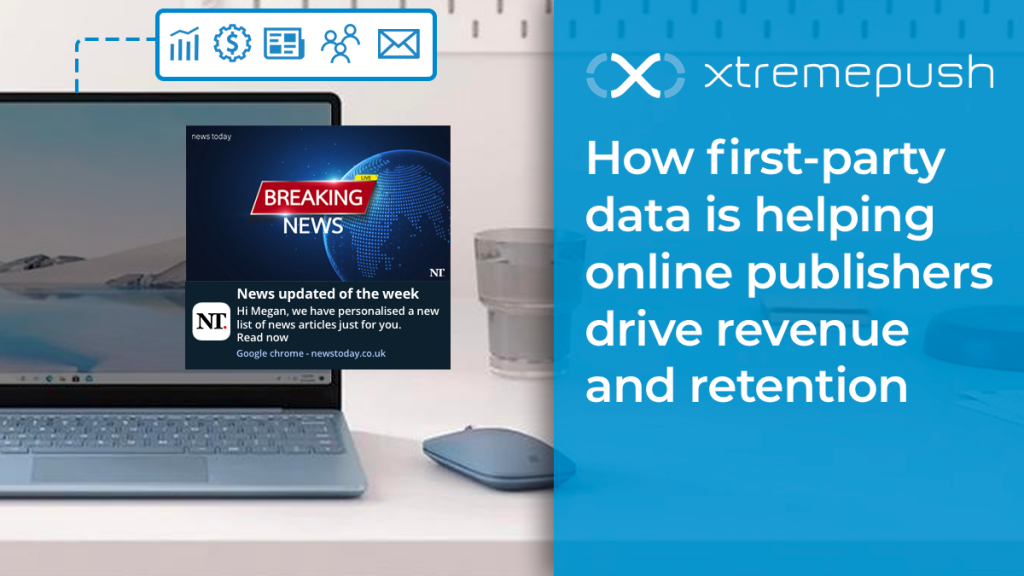 I believe publishers can, and will, flourish in a post-cookie landscape. But to do so they must take action and embrace their first-party data.

The background to all of this is obviously data privacy laws and behind-the-scenes changes at a browser level. So much is up in the air, and it’s still very unclear where the pieces will land. Publishers are the ones caught in the cross-fire here.

But even if these privacy concerns are satisfactorily addressed and an alternative to the cookie is found (which Google believes it has cracked) it doesn’t change the fact that the prevailing advertising model is killing publishers.

Revenue from traditional display advertising has been on the decline for years. An IAB study from 2020 reported that despite an increase in online audience numbers, ad revenue was down by 25% on the previous 12 months. This is despite an average increase of 49% of users on their site.

It really underlines how precarious the situation is for publishers, and how beholden they are to external parties. Even when they do things right, it’s not enough to guarantee results. And let’s be honest, they’ve never seen their fair cut of the action anyway.

There are no prizes for guessing where the revenue has disappeared to. Advertisers are upping their spend on social media and video platforms year on year.

You could argue that there is simply a display ad fatigue, with publishers feeling the brunt of it. Maybe over the years consumers have developed “banner blindness” en masse. But we also have to acknowledge that this is a symptom of the poor quality, third-party data that programmatic ads rely on.

Facebook, YouTube, Twitter and so on all have the secret sauce; rich, first-party customer data. These walled gardens are able to serve up relevant audiences on-demand.

If publishers are to control their own destiny, they must create their own walled gardens. And there is already some exciting precedent for this.

Most notable are the Vox Media group and the Washington Post, who are both developing their own advertising ecosystem.

The New York Times made industry headlines when it announced its intention to switch exclusively to a first-party data model. It has plans to offer up 70+ unique segments to advertisers, covering various age groups and interests.

The early signs are that the strategy is working. First-party data drove 20% of NYT’s ad revenue in Q4 of 2020, up from 7% in 2019. This doesn’t surprise us. Last year’s study from ISBA revealed a 30X higher monetization of known users versus unknown.

This is where the true potential of first party data is seen. What these brands are doing is leveraging the strength of their relationships with their readers and jumping out ahead of the pack.

They are all creating their own robust, accurate audiences for advertisers to select from. The value is obvious, allowing publishers to keep the ad revenue generated to themselves without cutting off a pound of flesh for Google and Facebook.

They can negotiate cost-per-impression and cost-per-clicks rates that are more favourable and let’s face it, fairer.

They’re taking ownership of their future, and reducing their dependence on the ad networks. This can only be a positive thing.

Publishers are no longer just the seller and the “inventory” in the display ad ecosystem. More frequently, they are becoming the buyers too, in a round-the-clock battle to acquire new readers.

Side by side with changes to advertising, we’re seeing more and more publishers look to subscription models, pinning their hopes on the paywall. The concept is simple; reputable brands delivering high-quality content for a relatively modest fee.

The challenge however, is first nudging readers through the paywall and ensuring that they see the value of their subscription early on. The key is relevance, but it’s also about regular, proactive engagement to develop your audience and foster the habit of visiting your website and opening the app throughout the day.

Your die-hard fans might look after themselves and take out a subscription with minimal persuasion. But what about the rest of your audience, the casual readers?

What first-party data allows you to do is segment your readers in terms of their browsing habits (once a week, regular readers etc). Your funnels can then begin to address some important questions like how do we convert someone who visits once a week into a daily visitor? And how do we then convert this daily visitor into a paid subscriber?

By combining this behavioural data with insight around their content preferences (whether they are sports fanatics or politics-obsessed) you can serve them the right articles at the right time and nudge them at a steady pace towards membership.

There are two other findings from the ISBA report that really stand out to me. 79% of publishers stated that gathering first-party data was a “business critical” objective.

But just 28% said it was being used well.

Why is it that despite its growing importance and apparent abundance, the practical steps needed to be taken around first-party data are proving to be a challenge for publishers?

From our own work with brands we see two common reasons; a) the siloing of first-party data and subsequent inability to unify consumer behaviour across multiple channels and properties, and b) an inability to action data via accurate segmentation and personalised communications.

And we could add a third factor here; the monolithic software giants that needlessly complicate and draw out the process of data unification and preparation, while locking brands into airtight, long term contracts.

This is why there has been so much interest in Customer Data Platforms (CDPs) over the past few years. CDPs present an altogether more successful, and faster, approach to data management.

But the raw technology itself is not enough. Providers must also offer a partnership approach, where performance and delivering on promises matter.

Our promise to publishers

I urge publishers to invest in technology that allows you to collect, unify, and activate your own customer data.  It will allow you to reduce your dependence on external organisations that hold all the aces.

We’re helping publishers identify and categorise the interests and intentions of their audience in order to create a stronger, more enticing proposition for advertisers.

Hand-in-hand with this, we’re enabling them to deliver more relevant experiences and campaigns to increase retention and boost readership figures.

My call-to-action is simple; don’t fret the loss of third-party data. Embrace it as an opportunity to do more with first-party data.  The impact will be phenomenal.