Mail Privacy Protection: What does it mean for you? 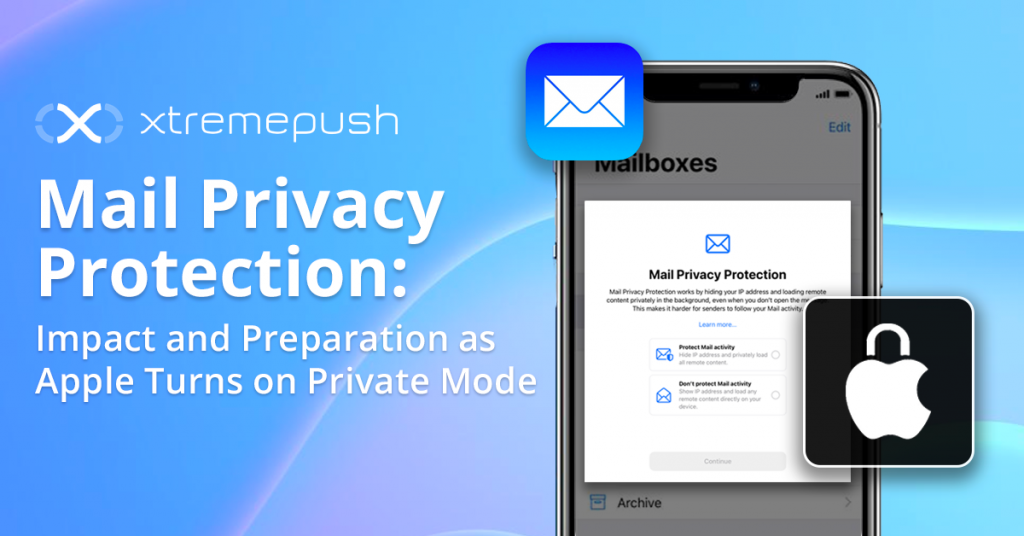 In June, Apple announced that it would be rolling out Mail Privacy Protection as part of its Mail App in the forthcoming iOS15, macOS Monterey and iPadOS15 updates later this year.

In the weeks since, marketers and email providers have been left to ponder and investigate the implications of this for email marketing.

In this guide, we want to get right to the nub of Mail Privacy Protection (MPP), what it will mean and what, if anything, you can do to prepare for it.

Mail Privacy Protection will give users the option to stop senders from using email tracking to collect information about the user.

When a user selects ‘Protect Mail activity’, Apple will load an email’s images through a proxy, so email senders cannot determine exactly when or where an email was opened.

Apple’s exact quote on this reads, “The new feature helps users prevent senders from knowing when they open an email, and masks their IP address so it can’t be linked to other online activity or used to determine their location”.

When MPP is introduced, users will be shown the following message: 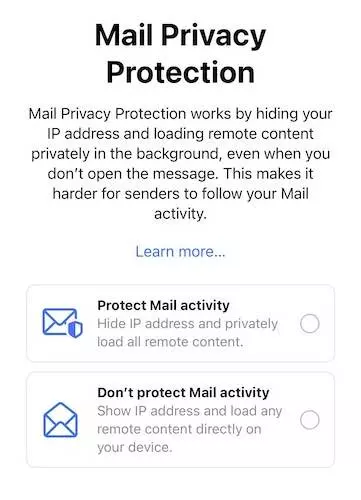 The message is worded in such a loaded way that the vast majority (90%+) are going to enable MPP. After all, who wouldn’t want to “Protect Mail activity”?

When Apple rolled out a similar Ad Tracking feature, it got an adoption rate of 96%. It’s likely similar levels will be reached by this release.

But is this such a big deal? How many users are we talking about? Well firstly, we need to understand that it does not just affect users with Apple email addresses. It’s anyone who links their email account to the Apple Mail client.

For example, you may have an @gmail.com address, but read your emails through an iPhone using the default Apple Mail Client.

This is what a lot of people do. Globally, Apple Mail has over 46% of the market share.

No definitive time has been given, but it’s likely to be some time in September or October.

Is there a workaround?

No, a workaround of any kind would defeat the purpose of MPP. Unfortunately, this issue is out of the control of both ESPs and marketers. We are at the mercy of Apple and the decisions of each individual user.

Well, actually, it means a 100% open rate for these users, but not in a positive way (as we’ll explain).

Currently, when you send an email through any Email Service Provider (e.g. Xtremepush), the email has a single 1px by 1px transparent image added to it. The path and parameters included in the image URL identify the project it came from as well as the profile it was intended for.

By seeing when the email client requests this image, the ESP knows if and when an email was opened. This is how open rates are observed and measured.

However, with Mail Privacy Protection enabled, it is Apple that makes the request for the “tracking pixel” (and all other images) when the email is received to the device.

And when the user opens the email, Apple then delivers the content.

Basically, Apple is inserting itself between the recipient and the sender.

So what’s the upshot of this? The ESP will only have visibility that Apple saw the pixel (and when that was). And the overall campaign open rate will be skewed because the Apple devices will always request the pixel when the email is received.

Dynamic content based on the user’s IP address will be irrelevant as the ESP will only have visibility of the server that the Apple device uses to download the content  in the first instance.

So if you run campaigns that reference the local weather, a location-based offer and so on, then the odds are it’s not going to work as it currently does.

At a glance, here are some of the other things likely to be impacted by MPP.

What should you do to prepare for Mail Privacy Protection?

This does represent a big change to email marketing’s current established practice, yes, but we aren’t recommending that brands press the panic button just yet.

First of all, remember that you still have a sizable portion of users (50%+) who don’t use the Apple Mail Client. Their open rates will not be affected.

So, it will still be possible to measure the overall efficacy of an email campaign just by focusing on the results amongst these users.

Long before MPP was ever touted, there were plenty of email marketing gurus who advocated for a move away from the open rate as the primary metric on which to base the success or failure of your campaigns.

For some, it’s the number of clicks on the CTAs in the email that matters far more. And this is something you’ll still be able to measure.

Over the next few months, we recommend that you start shifting the focus away from open rates and look at other ways to quantify success.

Subject lines, alongside the timing and relevancy of an email, are one of the biggest factors in whether an email is opened or not.

So if you aren’t doing so already, now is the time to start A/B testing some subject lines. Use the next few months to find definitive answers (or as close to that as possible) about the impact of emojis and dynamic content (e.g. recipient’s name) on the open rate.

And judge the impact of these things on the click-through rate as well while you’re at it.

If this is something you regularly do then continue as normal. But remember to investigate this again when we get closer to the actual release of MPP as culling contacts based on recent “opened email” engagement may be more complicated (if not impossible).

You may be better to clean these lists based on how recently they made a purchase, logged into their account or some other quantifiable way of evaluating how engaged users are.

Put more emphasis on other channels

Yes, email is a cornerstone of most marketing strategies, but it’s not the only show in town. We advise that you continue to explore the use of SMS and push notifications as supplementary outbound channels.

From the data we’ve observed across our client base as a whole, these channels very often give better engagement and conversion rates than email.

Digital marketers and CRM professionals are always going to be at the mercy of companies like Apple and Google. Changes made at an operating system and device-level can seriously disrupt your existing way of doing things.

In this instance, we don’t believe that the impact of Mail Privacy Protection is going to be significantly negative. There is still plenty of time to consider its likely implications and either implement a new strategy or switch your attention to an alternative metric.

We recommend that you join us for our upcoming webinar on this topic (or watch it back on-demand) by registering here.

Xtremepush is the world’s leading customer engagement, personalisation and data platform. We work with top brands across multiple industries. Schedule a personalised demo of our platform to learn more about how we can help your brand drive revenue.