Google has seen a notable difference in the use of mobile and behavioral changes prior to this years World Cup. According to Google, just 18% of relevant searches took place on a mobile device in the World Cup in 2010. And earlier this year During the UEFA Champions League semi-final match, 63% of searches were via mobile. Google’s noted behavioural changes have resulted in more searches now occurring during a match and peak after a goal is scored, whereas in the 2010 World Cup, where less mobile devices were on hand, search volume fell during the game.

For marketers seeking to target fans, the opportunity to engage fans directly to their palms really couldn’t be any better. With recent research from Google finding that 25% of UK men admit to shedding a tear during a football match, and for many, the feelings they experience when watching a pivotal match can even overshadow the emotion they feel on some of the biggest occasions in their lives, including the birth of their first child. Engaging with these passionate fans in the heat of the moment can be incredibly valuable for brands.

Here are several mobile trends happening right now in the world cup from Dating, to Dining and Betting:

Along with Brazilians passion soccer and samba there has been an explosion in location-based dating app Tinder fueled by a volatile mix of delirious FIFA World Cup tourists, excited locals, and perhaps copious quantities of alcohol. It seems that there are more matches taking place on the dating app Tinder during the world cup than all the FIFA matches played globally to date, no pun intended. This is not surprising as the Tinder app sees 750 million swipes and 100 million matches everyday. It has seen a 50 % increase in downloads in Brazil since the World Cup began and has been quoted as “A potent aphrodisiac for mobile dating apps”. http://qz.com/225744/the-world-cup-is-a-potent-aphrodisiac-for-mobile-dating-apps/ With an estimated 600,000 tourists from 186 countries expected to visit Brazil during the World Cup, adding to the 3.1 million Brazilian spectators ,undoubtedly, Tinder will drive matches with multiple nationalities in the mix.

McDonalds is focusing on engagement with its fans and has created an augmented reality app where you can test your scoring skills while being challenged with hurdles. McDonalds latest App ‘Gol’ has been released specifically for the World Cup and is brought/bringing augmented joy for the Fifa world cup. So in order for it to work you have to buy a pack of the FIFA 2014 special edition fry boxes. 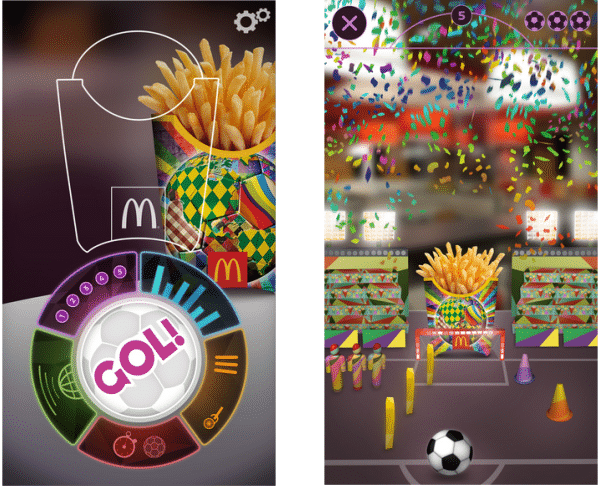 The first image in the screen grab gives you various options on the spinning ball. While you can launch the game from here after scanning, you can always check the leader board, list of badges and countries that are playing the game. With the second screen image the app allows you to score some goals at the tap of a finger, and to do so you can select your favourite team and then pass the different levels. The interactive App also provides the user with music in the background to build up the tempo and keeps advising on how to make the game interesting.

Paddy Power became the first bookmaker to have an app in the Apple Store before the last World Cup in 2010 when mobile betting was in its infancy and now generates an industry-leading 54 percent of online revenue via smartphones and tablets. 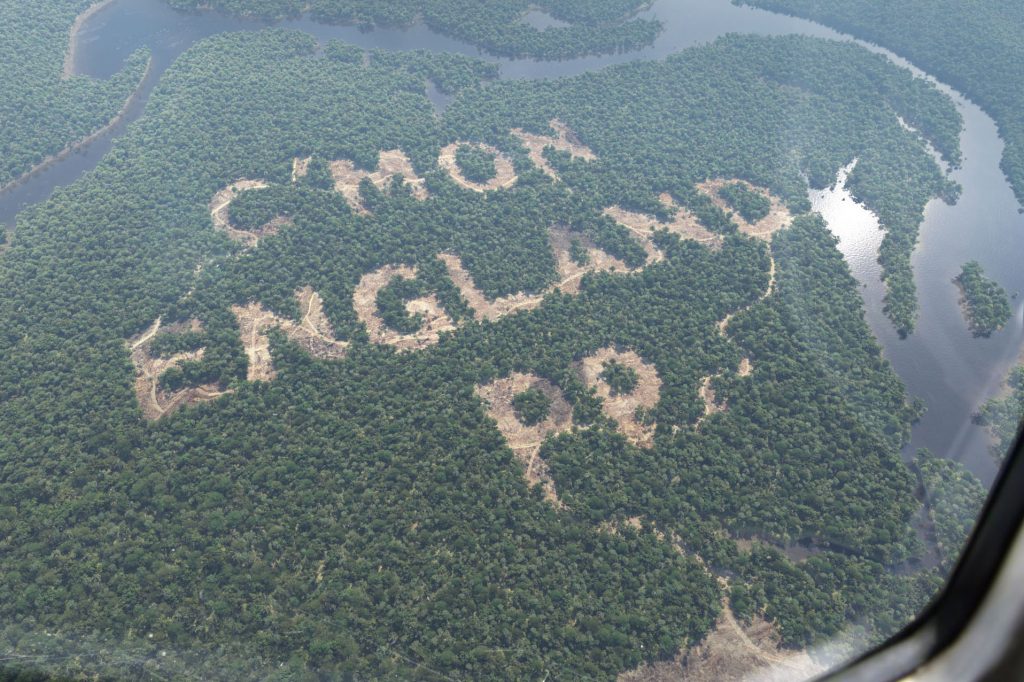 Paddy Power tweeted this picture from its official account – but was it legit?

With less than a week to go until England’s first match in the Brazil 2014 World Cup, a number of “photographs” from various angles were linked to on reddit showing the message “C’Mon England” carved out in trees, Paddy power then tweeted a picture of a message carved into the Amazon rainforest which read “C’Mon England” and users were quick to suggest the letters at the bottom spell out PP in reference to Paddy Power. Paddy Power even tweeted using a reference from that famous awkward one liner “Run Forrest Run” from the 1994 romantic comedy drama Forrest Gump tweeting “Run, Forest , Run! #Brazilnuts”. 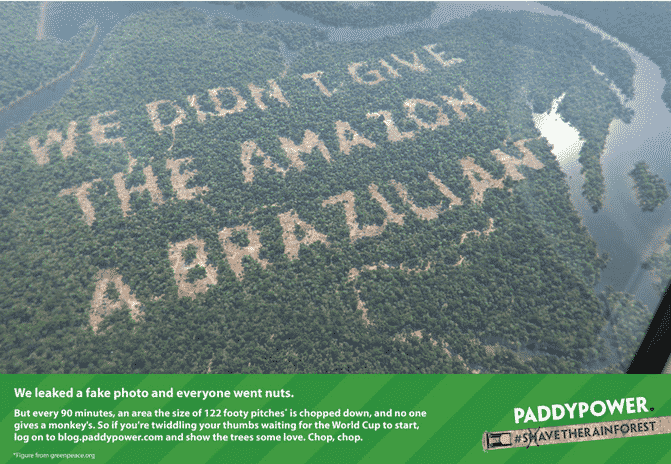 Of course Paddy carved the trees in the Amazon Forest with good intent… You can show the trees some love by visiting this link: http://www.greenpeace.org/international/en/campaigns/forests/amazon/