What does Apple’s App Tracking Transparency framework mean for you?

What is App Tracking Transparency?

The App Tracking Transparency (ATT) framework is a new policy from Apple, originally slated for release as part of the iOS 14.4 update.

Essentially, it will force app developers to request their users’ permission to track their personal data via their unique Identifier for Advertisers (IDFA). At present, permission to track IDFAs is assumed on download, with app users needing to manually opt out.

The IDFA is a randomly generated ID given to each iOS device, which can be used by advertisers to track behaviour associated with the device and deliver personalised advertising content. The IDFA does not otherwise reveal or share any personal information (name, location etc).

At the time of writing, the ATT framework is expected to be introduced in early Spring 2021.

Once it’s implemented, an opt-in message will need to be served to users, as is currently the case with push notifications. 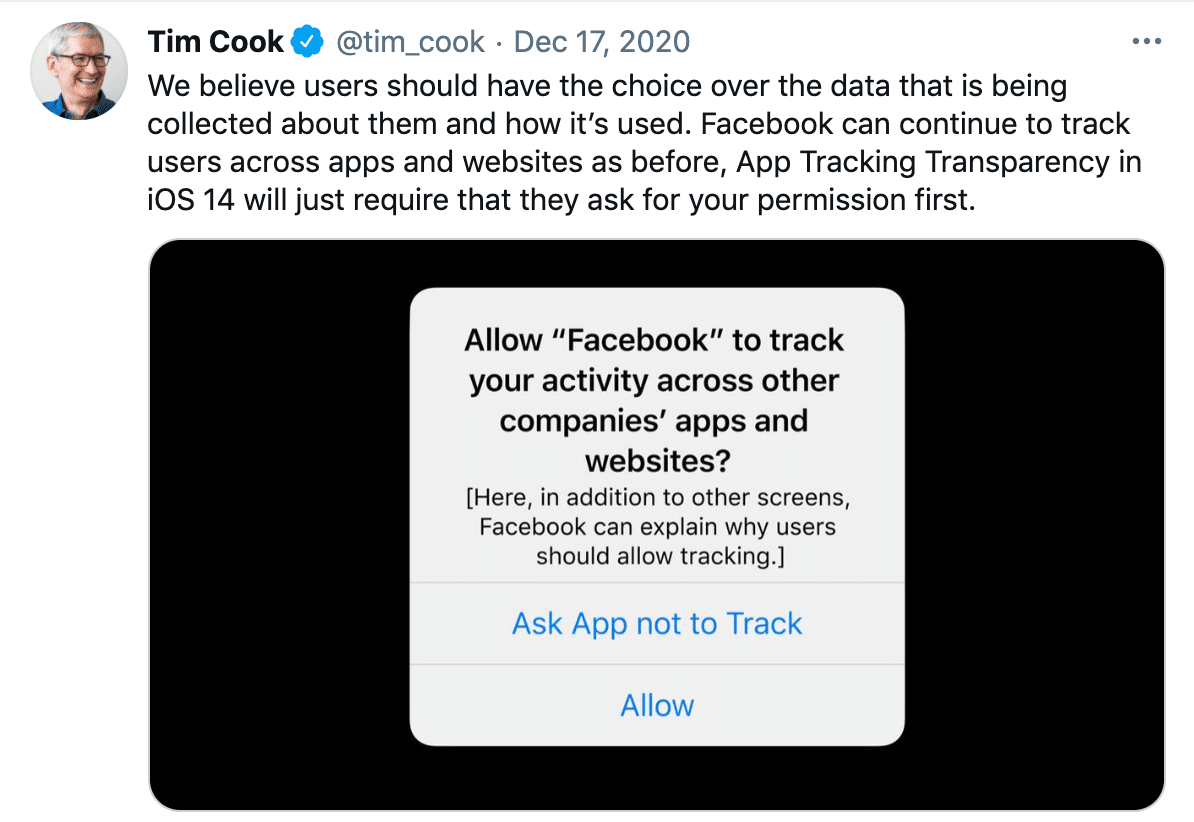 The image above is a tweet from Apple’s CEO Tim Cook. As well explaining Apple’s position and rationale, it shows what this permission request will look like.

What impact will App Tracking Transparency have on you?

If your iOS app currently does not track IDFAs then this update will not negatively impact you.

However, if your iOS app does track IDFAs, and you intend to continue doing so, then you are obliged to use ATT. Here’s what Apple has said about this;

This will likely have a significant, negative impact on the volume of data collected from iOS devices. Commentators are predicting just 5% of users will allow IDFA tracking, but the actual figure may be less (as some early tests have suggested).

It is important to be aware of how this will impact your ability to attribute and accurately track the efficacy of your advertising.

If your app relies on advertising revenue then you will lose the advertising content shown in-app will not be personalised to the user. Realistically, this means a) fewer clicks and b) reduced revenue from advertising generally.

Facebook has already openly criticised ATT, and believes that the vast majority of users will withhold consent, resulting in a loss of billions of dollars in advertising revenue for the social media giant.

Google, meanwhile, has already stopped using the IDFA, in order to avoid the permission request popping up on iOS devices at all.

Suffice to say, a lot of people aren’t happy with what Apple is doing. But it is still going ahead with ATT as planned.

What can you do to persuade people to give you permission?

This is the fundamental issue at play; persuading users to let you track their IDFA.

Although it is possible for users to manually toggle permission on/off at any point, realistically the initial opt-in request is likely to be your best chance.

Please note, you are only allowed to display this once per device.

As you will have seen in the example shared by Tim Cook which we included at the top of this article, this is a small amount of space available to you to make your case.

The first thing to note is that Apple has made it explicitly clear that you cannot incentivise the opt-in in any way.

We would recommend that, prior to the standard opt-in request, you display a “soft” prompt. This will give you greater freedom over the format and messaging, in order to create a compelling case for why you want to track the IDFA.

We advise that you are open and honest here, detailing exactly how you intend to use the IDFA and why it is important to you.

For example, you might say “We will only use your data to personalise the ads that you are shown in-app. Otherwise, the ads you see are likely to not be relevant to you. Without advertising revenue, we would not be able to provide this app and service free of charge”.

You can then use the customisable space as part of the official permission request simply to reinforce this message, which would only be shown to those who have reacted favourably to the soft prompt.

Hopefully, by making users aware of why you need their data, what you intend to do with it and, crucially, why it will benefit them you will secure more opt-ins.

We hope the tips above will help you convince users to share their IDFA with you. However, this is going to be a difficult challenge for every app developer, irrespective of the industry they are in.